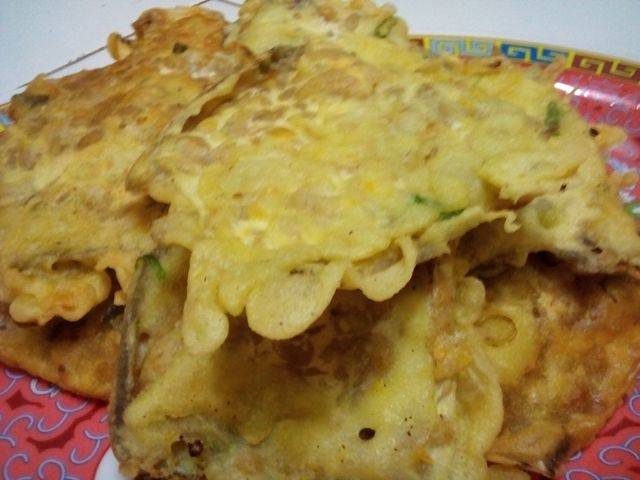 I used to call my grandmother with Ninine (grandma in Java – Banyumas dialect is Nini, so Ninine means the grandmother). Ninine, my grandma, was a tough woman who woke up at 1 am to prepare the foods for her to sale; rice mixed with veggies and tempeh mendoan.

Ninine was originally from Banyumas, Central Java, Indonesia. Banyumas is an area in the Central Java that has different traditions as the other parts of Central Java. They even have a specific dialect which is called “ngapak“. My mom told me that my grandma was selling foods since she was very young.

Her stall was at the side of her bamboo house that connected straight to the kitchen. She was still using “luweng” a traditional stove made of mud with firewood as the source of the heat. Her bamboo house, as I recall,  was very homey and felt warm all the time.

Every day, Ninine would open her food stall right before dawn. From the room just next to the food stall where I slept, I could hear people coming to buy some foods for breakfast, even the sun had not risen yet. The top selling food was “tempeh mendo”. Yes, Ninine often called tempeh mendoan with tempeh mendo.

Tempeh mendoan, sometimes people just call it mendoan, is a snack, often eaten together with rice and some cooked veggies, but people also eat it just like that without anything. But it is fried only half done. The well done fried tempeh is called gorengan tempeh or ordinary fried tempeh. Gorengan tempeh is just ordinary snack in all across Indonesia. But tempeh mendoan, we can only find it in Banyumas. Well at least, the best tempe mendoan still can only  be found in its birthplace.

Sometime ago, I watched on TV a short report on a “giant mendoan” in Banyumas which was viral on the internet due to its gigantic size. It was reported around 30 x 20 cm in size while ordinary tempeh is just 5 x 10 cm in average. I believe people will full immediately after finishing one giant mendoan. At least I will.

The best thing about mendoan, compared to the ordinary gorengan tempeh, is the freshness (since it is only half done fried) that will boost its great taste on the tongue. But you have to eat it while it’s warm. Since I know exactly the taste of my grandma’s mendoan, I had no difficulty in translating it into a fine recipe. So, below is my favorite mendoan recipe ever. 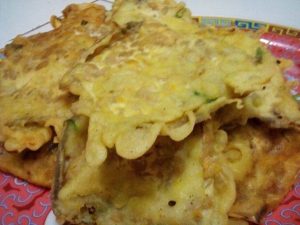 3 packs of raw tempeh mendoan, 1 pack usually consist of 4 sheets of tempeh. But if such tempeh is not available, you can always use ordinary tempeh block and then slice it as thin as you can.

200 gram of all purpose flour