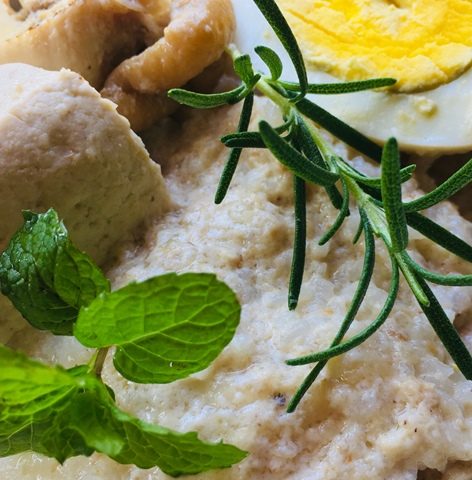 Eid is a day of victory for Muslims who have been fasting for a month. That’s why Eid is a moment awaited by most Muslims. The excitement will be very visible in a country with a Muslim majority like in Indonesia. Welcoming the victory day the Muslim community in Indonesia used to hold parties. Various foods are made to accompany that happiness. Opor is the Eid celebration culinary; Eid specialties.

In Indonesia, during Eid, everyone, relatives, neighbors will visit each other and apologize. Even those who live in other cities will be very happy to return home to gather with large families. And to welcome relatives, families will serve special dishes.

Ketupat or kupat for the Javanese people means “ngaku lepat” or “admitting own mistake”. Confess all mistakes. Combined with coconut milk soup which is literary in Javanese called “santen” represents the word “nyuwun pangapunten“ or “asking for forgiveness”. Verbally “santen” reads as “apologizing both physically and mentally”.

Serving ketupat with coconut milk to the guests who came for halal bi halal is a symbol that the host acknowledges his mistake and apologizes. For guests, eating ketupat means to accept the apology. So in the old days Javanese people forgive each other without having to verbally apologize. For people who are in conflict asking forgiveness is a hard thing. There is anger, humiliation, and shame to admit. Beyond all that, eating ketupat together on Eid day they forgive one another without being humiliated. This is the reason why opor has become Eid celebration culinary.

Nasi uduk (seasoned steamed rice) is an adaptation of the Prophet’s favorite menu. The Prophet used to eat nasi lemak, which is rice cooked with milk. Javanese people adapted the recipe to nasi uduk; cooked rice with coconut milk. If the dishes are served alone, it will certainly be ridiculous. Then the people serve the ketupat and nasi uduk with various appropriate side dishes and vegetables. Some various dishes are regularly served to accompany the ketupat or the nasi uduk that in some point everybody serves them during the Eid. These cuisines become the special dishes of Eid.

One of the complementary dishes is opor with a combination of fried chili sauce. Enlivening the main dishes is also served klethik-klethik or snacks; chips from melinjo, fried peanuts cooked with garlic, and various souvenirs from family members going home from another cities or sometimes from abroad.

The following is my family’s favorite chicken opor. Because my daughter does not eat meat and fish since she was a baby, then here I add tofu and boiled chicken eggs.

500 gr chicken breast, cut in some big chunks, wash thoroughly, boil twice (after 5 minutes in boiling water, throw away the first boiling water then boil again in 500 ml of water until the broth is formed in approximately 15 minutes)

5 blocks of tofu, cut into half

4 boiled eggs, put some more if you wish