Vuar Masbaat in Tanimbar Kei language means an invisible mountain of gold. This temple is modest temple but it has a deep story behind it.

This time I would like to invite you to visit the Vuar Masbaat Temple on Tanimbar Kei Island. It’s the southernmost island of Maluku Province. One of the outer islands of Indonesia. As a small and remote island, this island has long been neglected. Unfortunately it’s also neglect its graceful.

In the figurative sense Tanimbar Island Kei is indeed a golden mountain. A place full of grace. Of course this can only be seen by grateful people. People whose hearts are clean and holy. 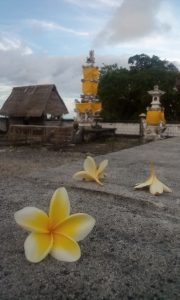 Grace was obtained by the Tanimbar Kei community from living in a very beautiful natural environment. White sand beach with very clear sea water. They get abundant natural produce from the coconut forests they have without ever planting. Besides, there are also unlimited sea products. All of that graces made Tanimbar Kei Island became a ‘golden island’ for the people.

We can go to this Tanimbar Kei Island by boat from Kei Kecil. We can charter a boat that we can ride or we take a boat that happens to be heading there. Travel by boat will be taken for 4-5 hours. By renting a boat for  several million IDR. The exchange rate of 1 USD is about 15.000 IDR.

If we can get a boat that happens to be heading there the price will be much cheaper. But it should be understood that the boat’s schedule is not clear. It’s schedule can go forward or back in a matter of days. The Tanimbar Kei people who are living in Kei Kecil, because they are in school, shopping, or other necessities usually know about this boat schedule by texting each other. It is the way they share the cost of travel together.