The history of the conflict in Lombok has long gone on. From intra-ethnic, inter-ethnic, and in its development after the reformation (year 1999) began to emerge to religious conflicts. The escalation of the conflict has become a concern by the government. They were building this Islamic Center and the mosque. Hubbul Wathan. To Love Motherland geven as it’s name.

This great mosque that became the Islamic Center stands majestically in the middle of the city of Mataram. It’s seems to be a monument to the people of West Nusa Tenggara in general. This monument is always reminiscent of ‘to love motherland’. The monument which is the biggest mosque on the island had become the center of a thousand mosques. The name Hubbul Wathan given to the mosque reflects the attention of the West Nusa Tenggara Government and Muslim authorities towards the development of Islam there. A caution to always ‘To Love Motherland’.

This great mosque is decorated with 99 meters of 99 Asma’ul Husna tower. 99 images of God. This Great Mosque was inaugurated by the Governor of West Nusa Tenggara, TGH Muhammad Zainul Majdi who is familiarly called Mr Guru Bajang on Eid al-Adha 1437 H or on Monday, September 12, 2016.

A large drum from the Indonesian Chinese Islamic Association (PITI) of West Nusa Tenggara became a multi-ethnic spirit accommodated by this mosque.

The large dome, which characterizes the mosques in Lombok, houses the main building of the mosque. Under this dome, inside the mosque is decorated with sparkling large chandeliers.

With a large courtyard around the mosque, this mosque feels relieved that it is visited by many worshipers and tourists. Indeed, the grandeur of this mosque is a symbol of ‘religious tourism’ for Lombok Island which is now growing in tourism potential. There are even foreign tourists visiting this Hubbul Wathan mosque. The foreign tourists did not mind when required to wear Muslim clothing to be able to admire the grandeur of the mosque.

The availability of a large parking lot coupled with parking in the underground of the Islamic Center mosque is ready to accommodate large numbers of worshipers and visitors.

The corridor of the mosque that surrounds the Hubbul Wathan mosque complex is a place for visitors to chat with their neighbors. Its high place with sturdy pillars makes the air around feel cool so visitors feel at home. 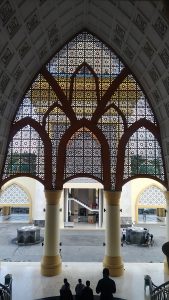